Vintage handcrafted pin. Set in solid sterling silver. The inlayed figure is that of the Knife Wing Man of the Zuni culture. Crafted by artist Lambert Homer. Recognized as a fine lapidarist in the Zuni Village. Lambert Homer collaborated with other artists who worked with trader C. G. Wallace. The pin measures 2″1/2  x  2″. A wonderful example of jewelry of the era. 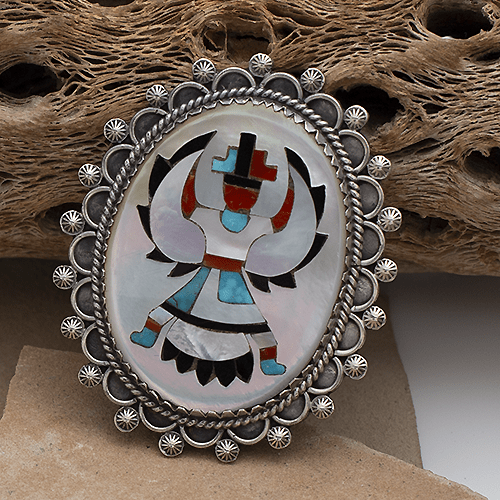 Anthropologist Frank Hamilton Cushing, who lived with the Zunis from 1879-1884 described knife wing this way:

“This curious god is the hero of hundreds of folklore tales, the tutelary deity of several societies of Zuni. He is represented as possessing a human form, furnished with flint knife-feathered pinions, and tail. His dress consists of the conventional terraced cap (representative of his dwelling place among the clouds). His weapons are the Great Flint-Knife of War, the Bow of the Skies (the Rainbow), and the Arrow of Lightning. His guardians or warriors are the Great Mountain Lion of the North and that of the upper regions. He was doubtless the original War God of the Zunis.”