Beautiful example of this well known Navajo artist. Andy Cadman prides himself on the special details he adds to every piece of jewelry he creates ! This particular bracelet is set in solid sterling silver and has 5 large Spiny Oyster Shell ovals set down the center of it. Measuring 1-1/4″ at its widest point , the bracelet does not taper. Its of medium weight and easily shaped to fit almost any wrist. The scalloped edges help create a very comfortable fit. 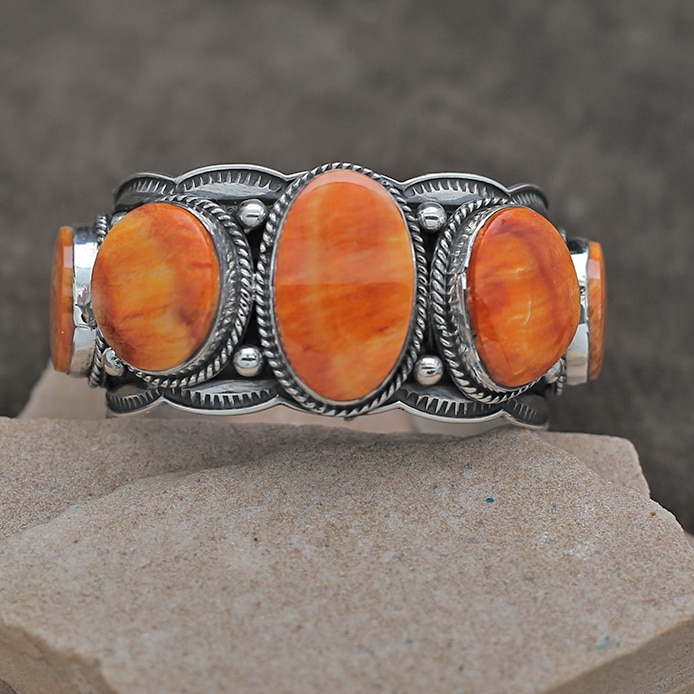 Andy Cadman is the older brother of Darrell Cadman and half-brother of Gary and Sunshine Reeves. Born in 1966 in Gallup, New Mexico, Andy began his career making beautiful stamped traditional jewelry at the age of 23. His work is highly prized for his use of gem grade natural turquoise set in sterling silver in distinctive world class designs.

Oxidized silver  ( black coloring in the silver ) is a process that many jewelers use to give sterling silver a black patina. It gives the jewelry an antique or tarnished look. The process consists of taking clean sterling silver and using a chemical (liver of sulphur) to treat it to speed up the tarnishing effect.