Navajo handcrafted multi-colored bracelet. Set in solid sterling silver. Genuine stones & shells such as malachite, spiny oyster shell, lapis and turquoise. Detailed arrow stamping on either ends of the bracelet give this piece a special touch. Measuring 1/2″ at its widest point. It also has a inside measurement of 5 1/4″ with a 1″ opening. The unique shaped bracelet is a average sized  that can be sized to fit almost any sized wrist. 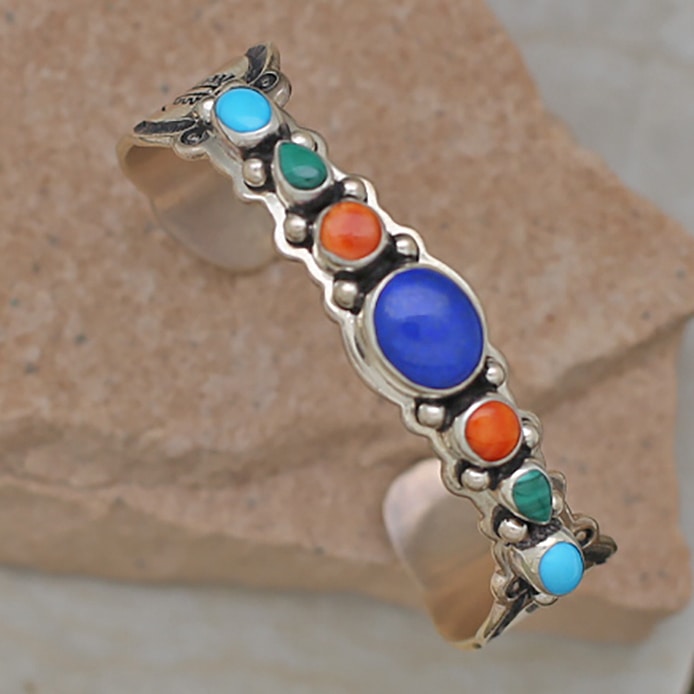 Spiny Oyster shell ( Orange & red) Living Spondylus shells are, indeed, very spiny, but the polished product looks very smooth, with some of its color variation strongly resembling that of the Blood Oyster. The resemblance is strong enough that it’s important to ask, when purchasing these materials, if they’re from Blood Oyster or Spiny Oyster. Artists often use Spiny Oyster as a substitute for Blood Coral. Although not nearly as rare as the Blood Coral or Rose Coral, divers collect Spiny Oyster by hand, making the work laborious and relatively expensive, with some risks.

Lapis Lazuli  (Dark Blue) Mines in northeast Afghanistan continue to be a major source of lapis lazuli. Important amounts are also produced from mines west of Lake Baikal in Russia, and in the Andes mountains in Chile. Smaller quantities are mined in Pakistan, Italy, Mongolia, the United States, and Canada.It is a stone prized for its intense blue color. The name Lapis Lazuli comes from the Arabic word lazward, from which the word azure comes, which means blue. Ancient Romans used to call it “sapphires,” which was subsequently applied to the blue variety of corundum we know today as sapphire.

Malachite -(Dark Green)  Malachite is a green gem that’s common in many areas of the world. It’s a copper carbonate mineral that was the first ore to produce copper. … Malachite forms inside limestone and is found in caverns in parts of Australia, France, and Arizona. The first deposits were found in Egypt and Israel over 4000 years ago.