Stunning handcrafted belt buckle by Zuni artist. 100% authentic and set in solid sterling silver. Almost 200 individual hand cut genuine stones and shells like turquoise,coral,black jet and white mother of pear are used in this buckle.  Detailed stamping around the edges along with twist wire creates a beautiful setting. Measuring 3″ x 2-1/4″. Please include your pant size as a FREE leather belt in included ! 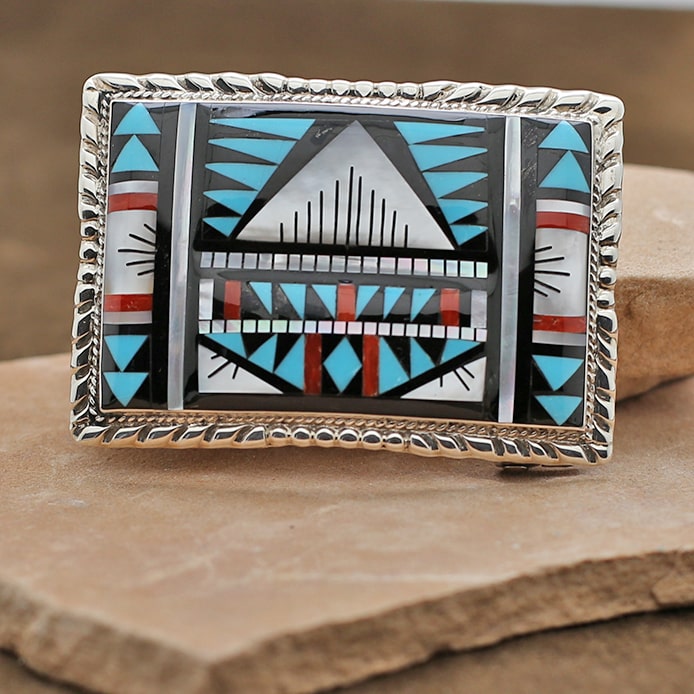 The provenance story of the White Mother of Pearl shell begins in the remote crystal-clear turquoise waters of Northern Australia, nurturing and growing the sought after White South Sea Pearls.

The lustrous pearly white color of the shells reflects the pristine natural environment in which they are formed and shells from this area are renowned to have the purest white coloring.

Jet – is a very lightweight stone comprised of fossilized coal/wood.  It is grounding and balancing, and as it also carries a negative electrical charge, is good for drawing power and knowledge to the bearer.   It is also helpful in stabilizing finances and is said to soothe migraines.   A highly protective stone, feminine, good for mourning & healing of grief.  Helps protect against illness, epilepsy, stomach pain, colds, glandular problems, and lymphatic problems.  Combined with Amber it is extremely powerful and protective.