Navajo handcrafted Ranger belt buckle.  Set in solid sterling silver ,this buckle measures 2″ x 1-1/2″ with the keepers are 7/8″ x 1/2″ and the tip is 3/4″ x 1″ . Outstanding stamping is done in a radiating style that fan out on every element of the buckle. Simple in its design, this is a fantastic piece. A FREE leather belt is offered with this buckle ! 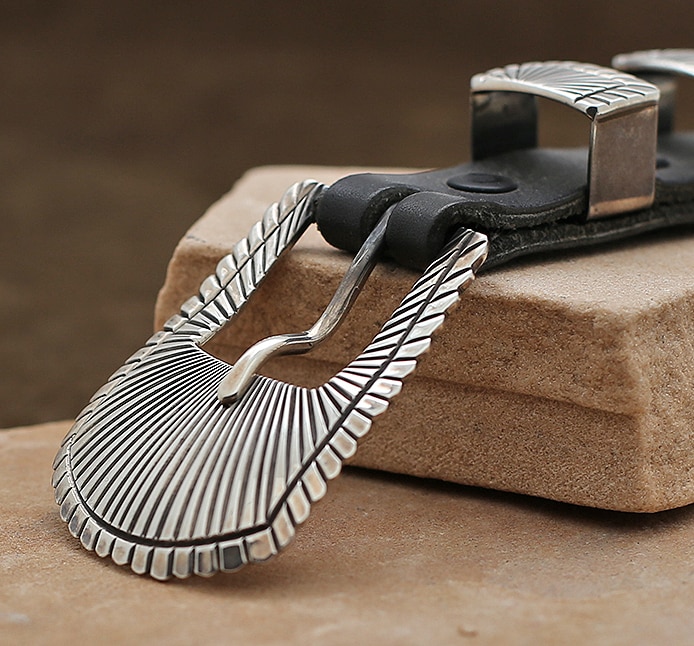 (Where the word silversmith came from)

Navajo (people), Native Americans of the Athapaskan language family and of the Southwest culture area. The Navajo are one of the largest tribes in the United States. Their homelands are in what is now northeastern Arizona, northwestern New Mexico, southeastern Utah, and southwestern Colorado. In the Navajo language their name is Diné or Dineh, meaning “The People.”

When the Navajo people returned to their beloved mesas and canyons in 1868, their new way of living led to many changes. Among other things, as they were no longer nomadic, they had greater opportunity to learn from each other. “The People” had long admired and used metal ornaments and horse equipment. They had used brass and copper wire to create bracelets and coins to fashion buttons.

Tools were crude and smiths had to improvise and create their own crucibles, bellows and emery paper. A smith could have had only a hammer and a piece of scrap railroad track for an anvil. Silver coins were melted for use.

By the 1890’s, traders took advantage of a new market with silversmiths and began selling them tools. Silver jewelry was used as barter on the Reservation where money was practically non-existent. Traders took silver and turquoise jewelry as collateral without giving a specific value to the piece. Any pawn unclaimed after an agreed period of time was considered “dead” and the trader could sell it.