Traditional Navajo Concho belt by artist Lee Charley. Laid out with 10 beautifully hand stamped round conchos with 11 butterfly conchos, all with a single piece of sleeping beauty turquoise. The round conchos measure 1-1/4″ and the butterfly conchos measure 1-1/4″ x 3/4″. Each one has copper strap(s) on the back to hold the leather. This size of this belt is on the smaller side of most concho belts but the detailed stamping and stone are beautiful. Easily worn with jeans or slacks. 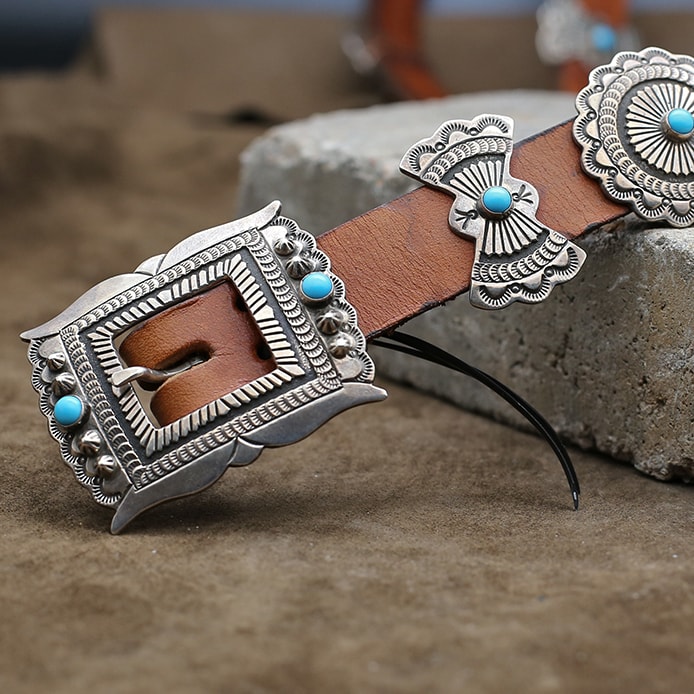 There is a sister mine nearby, called the Bluebird, that produces some of the world’s most beautiful azurite. This material is a copper oxide and also contains malachite, crysacolla as well as a mineralized copper or cuprite. This is a rare and undervalued gem stone that has all but disappeared from the marketplace.

Although it is commonly said the Navajo (Dine’) borrowed the idea from Spaniards, the concho belt has become a long-standing Native tradition. Concho Belts reportedly began appearing in Navajo country in the late 1860s or early 1870s. Other Native Americans including the Zuni and Hopi also made traditional Concho Belts before long.