A rare example of a late First Phase and early Second Phase concho belt. This particular piece is made of coin silver which was common in many First Phase belts. Although this belt does have ONE piece of silver that has been soldered onto the buckle to hold the leather. All the the other craftsmanship is hand cut with no use of copper straps or soldering ,because of this we are classifying this belt as an early Second Phase belt , probably in the late 1890’s to 1900’s. First Phase belts use NO soldering and date from the 1880’s to 1890’s. Either way this is a magnificent piece and is a one of a kind. Measuring 40″ in length with 9 large oval concha’s ( 3-1/2 x 3 ) and buckle ( 4 x 3 ). Beautiful craftsmanship that is a true reflection of the time period. Call for pricing 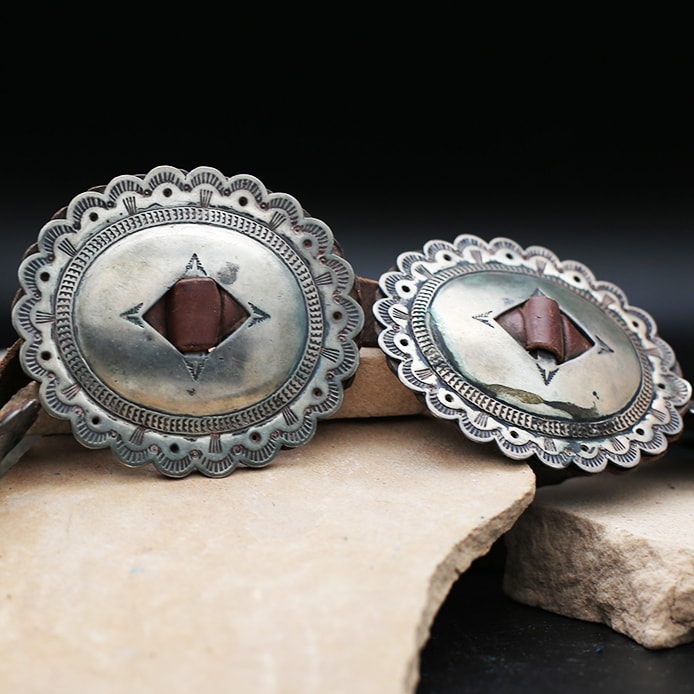 The earliest concho belts are now referred to as “First Phase” belts. This style of belt was made before Native silversmiths had learned much about soldering. The conchos were hammered out from melted coins, cut and filed into shape, engraved and a diamond shape slot was cut out of the middle of the concho, with a bar left across the center of the diamond shaped slot for the leather belt to loop through. The first phase conchos required no soldering and is generally thought in terms of the years from the late 1860s to the 1880s.

In the ” Second Phase “of concho belt development, the silversmith had began to solder. He now soldered a silver, or later a copper, strap or bar across the back of a concho to run the leather belt through (more often silver in those early years). This allowed for the entire face of the concho to be decorated and kept the leather belt on the backside of the concho. The second phase is generally thought of as being durning the years of the 1890s through early 1900s.