Outstanding example of a early Second Phase concho belt. Circa early 1900’s. The use of Ingot silver is very common of this type of belt and its time period. These early belts were the beginning of the Navajo’s learning to solder straps to the back of each concho to loop the leather through. This particular piece uses copper for the straps due to its ease of molding it. All 8 concha’s are very heavy and there carving is chiseled in the silver. They are 3″ x 2-1/4″ ovals with the buckle being crafted out of a single piece of ingot silver and measures 3-1/2″ x 2-1/4″. A fantastic example of a silversmiths journey in crafting jewelry ! Call for pricing 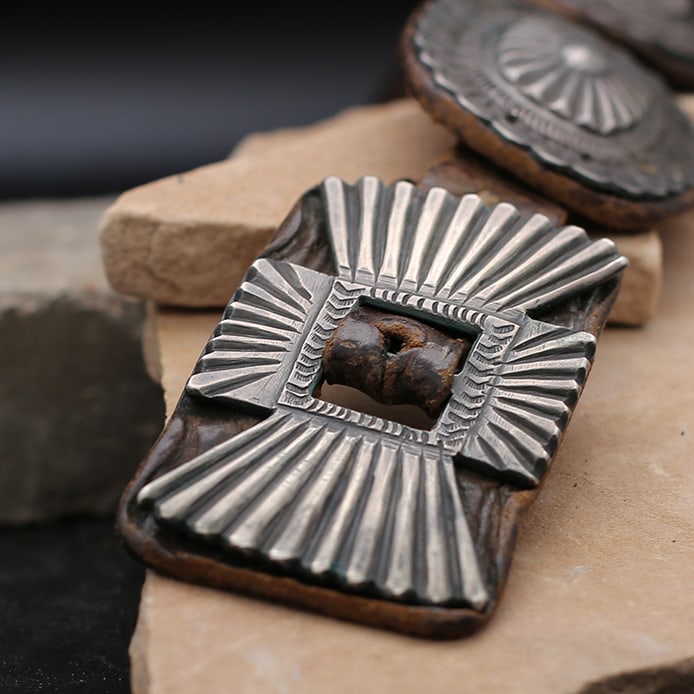 An ingot is a simply a bar or block of metal. The blocks can be any shape but are traditionally rectangles. The metals most commonly used in Native American jewelry are sterling silver or coin silver. … To make an ingot, the chosen metal is melted, then poured into block forms.From this the silver is hammered and shaped into the concho’s you see above.

Although it is commonly said the Navajo (Dine’) borrowed the idea from Spaniards.Concho Belts reportedly began appearing in Navajo country in the late 1860s or early 1870s.

In the 1880’s the second phase of concho belt development, the silversmith had begun to solder. He now soldered a silver, or later a copper, strap or bar across the back of a concho to run the leather belt through (more often silver in those early years). This allowed for the entire face of the concho to be decorated and kept the leather belt on the backside of the concho. The second phase is generally thought of as being during the years of the 1890s through early 1900s.