Circa 1930-1940 Fred Harvey concho belt. Fred Harvey is synonymous with the southwest and its history. Know for his unique style of jewelry designs that used easily identifiable images of the southwest like, arrows, thunder birds and cactus, that travelers in the 1930’s could recognize. This type of jewelry is highly collectable. This particular concho belt is on leather and measures 32″ in length. It has 9 oval concha’s with detailed stamping and a single turquoise stone. Each concho measures 2″ x 1-1/2 with the rectangular buckle measuring 3″ x 2-1/2″. Call for pricing 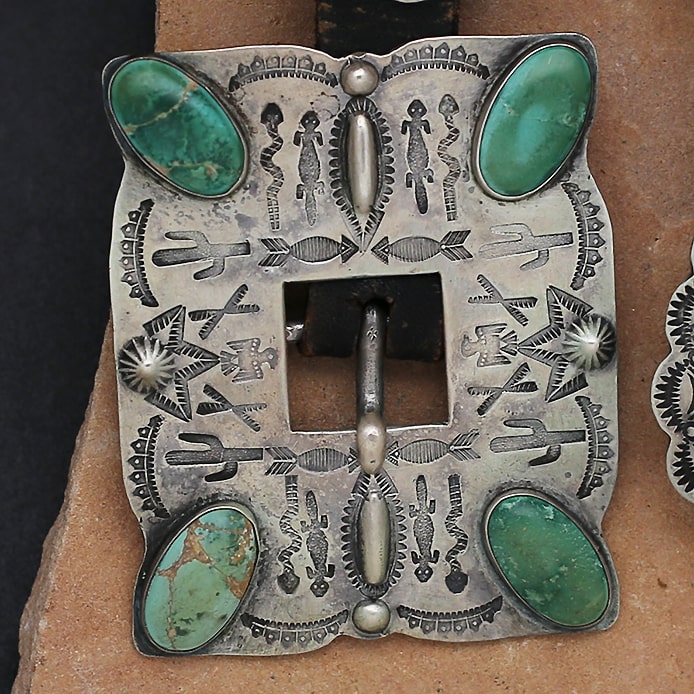 The railroads arrived in the Southwest in the 1880s. The Fred Harvey Company opened shops in the railroad stations and provided a ready market for Navajo silver. As a result, silver smithing flourished and designs were elaborated, often reflecting Anglo taste. This concho belt has arrows,cactus,snakes,lizards and thunder birds that are intricately worked into the design, an example of some of the high-quality Fred Harvey jewelry that was offered.

“Third Phase” of concho belt development, you started to see the “butterfly” appear between conchos and also the use of turquoise as an adornment on the face of a concho. A “butterfly” is simply another smaller concho in between the bigger conchos and its shape somewhat resembles that of a butterfly (a bow shape). Copper for the strap across the back becomes more prevalent than a silver bar as you go further on in time also. A belt with butterflies (and sometimes turquoise) from the early 1900s through the 1930s is generally thought of as “early third phase” and a belt from the 1940s through 70s (or so) would often be referred to as “vintage” while anything newer would be modern to contemporary.