Great example of how the later Second phase concho belts began to transition into there final and current phase of styling. Although no butterfly pieces were used in this piece the silver scalloped edges of each concho began to be seen. Turquoise was also used as part of the design. Seven concha’s were used measuring 2-3/4″ x 2-1/4″, with the unusual oblong buckle measuring 2 x 3.  The repousse’ stamping is typical of this time period and helps date this concho belt.Total length is 38″. Call for pricing 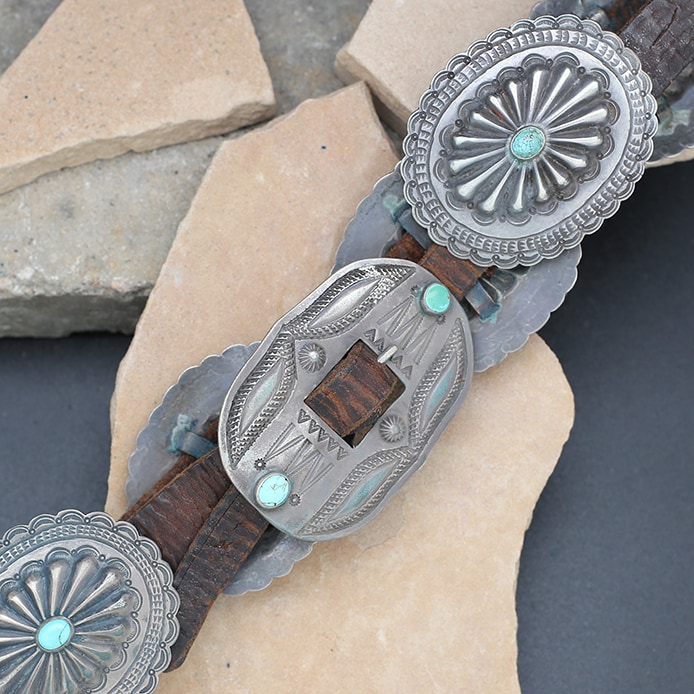 The earliest concho belts were made out of hammered coin silver. Their designs progress through stages, beginning with an oval shape that was scalloped on the edges, elementary stamping and chiseling. The center of the First Phase concho was an open diamond or oval and the back had a copper loop through which a leather belt could pass.

In the second phase of concho belt development, the silversmith had began to solder. He now soldered a silver, or later a copper, strap or bar across the back of a concho to run the leather belt through (more often silver in those early years). This allowed for the entire face of the concho to be decorated and kept the leather belt on the backside of the concho. The second phase is generally thought of as being durning the years of the 1890s through early 1900s.