This is a uniquely styled belt and some what eclectic in its design. The belt has concho’s , in which some of them  look to have had stones mounted in the center of them at one time but seem to have been removed at some point in the life of this piece. All the concho’s and butterfly’s are mounted on the wide piece of leather and are tied on underneath making them look like they are resting on the wide 2-1/4″ leather belt. The concho’s measure 2-1/4″ x  2-3/4″ and the butterfly’s measuring 1-3/4″ x 2-1/4″, the buckle is a 3″ x 2-5/8″  oval. The belt has 36″ of total length. Call for pricing

Ask a Question About Third Phase Concho belt on leather 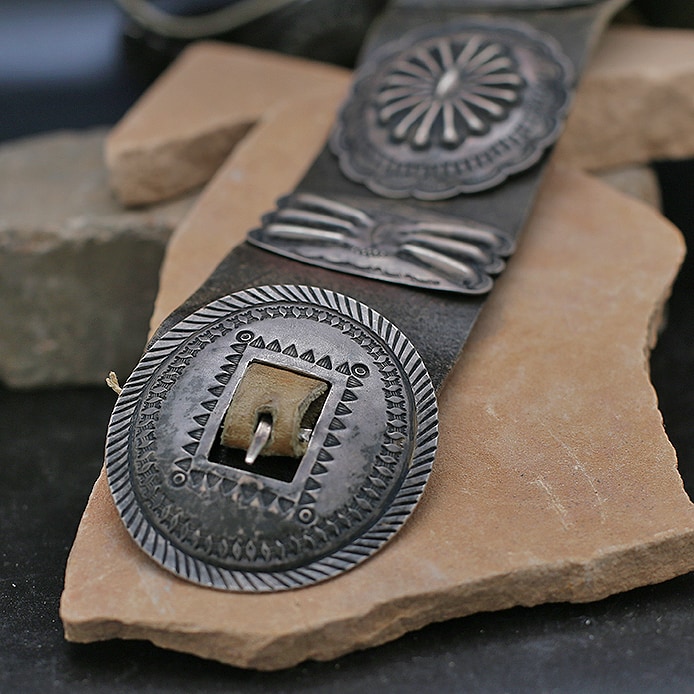 “Third Phase” of concho belt development, you started to see the “butterfly” appear between conchos and also the use of turquoise as an adornment on the face of a concho. A “butterfly” is simply another smaller concho in between the bigger conchos and its shape somewhat resembles that of a butterfly (a bow shape). Copper for the strap across the back becomes more prevalent than a silver bar as you go further on in time also. A belt with butterflies (and sometimes turquoise) from the early 1900s through the 1930s is generally thought of as “early third phase” and a belt from the 1940s through 70s (or so) would often be referred to as “vintage” while anything newer would be modern to contemporary.