This beautiful Third phase link concho belt is a very unique piece of history. It dates to the late 1940’s  to the early 1950’s. It bears the stamp of the “United Indian Traders Association” or UITA, along with a distinctive”arrowhead” stamp placed between the ” I” and the “T”. The United Indian Traders Association (UITA) was established on September 13, 1931 for the expressed purpose of authentication of Indian crafts.1 At the time, the UITA as an important player both in Indian cultural life and in advocating for the sale of authentic Indian arts and crafts.It is uncertain when use of UITA stamps ended. The general consensus among veteran collectors and dealers is that by late 1950’s to early 1960’s

In addition to this stamp there is a number ” 22″ which refers to the UITA’s member number assigned to the trading post from which this piece came from. In this case it is from the Dean Kirk Trading Post in Manuelito, N.M. His stamp was given to his Trading Post  by the board of UITA sometime between 1946-1948. This link Concho belt has 9 oval concha’s , 10 butterfly’s and 1 square buckle. The buckle measures 2 x 2, with the oval concha’s measure 1 x 1- 1/2 and the butterfly’s measuring 1- 1/2 x 1/2. Over all length is 33″. One of a kind piece. Call for pricing. 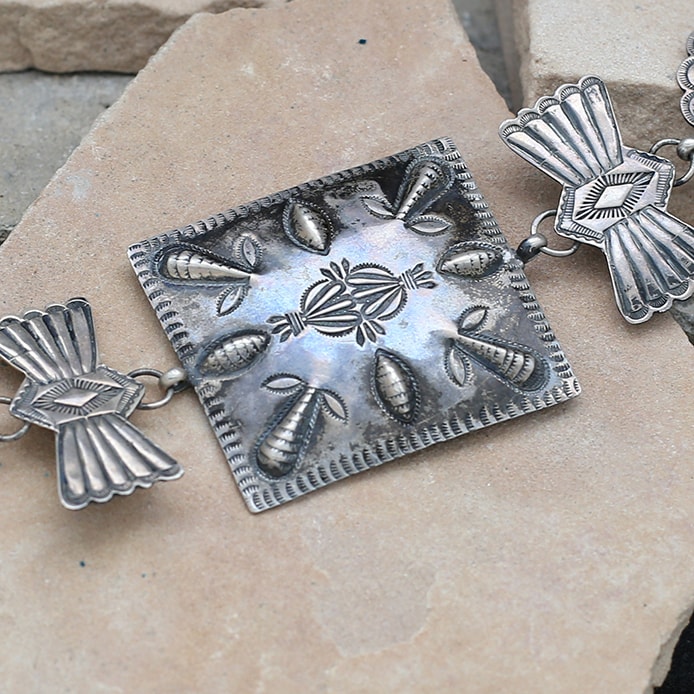 In the early 1900s, the third phase of the concha belt began when artists learned how to set turquoise into their pieces. Turquoise was first set by Navajos in silver around 1880. The use of turquoise in silver did not become prevalent until the 1890s, due to the scarcity of the stone. It was during this time period that the Colorado and Nevada turquoise mines began to export their turquoise to New Mexico and Arizona.Starting in the late 1910s, vertical silver butterflies were placed between the conchas. This was followed by link concha belts in the 1920s.This “Third Phase” of concho belt development, you started to see the “butterfly” appear between conchos and also the use of turquoise as an adornment on the face of a concho. A “butterfly” is simply another smaller concho in between the bigger conchos and its shape somewhat resembles that of a butterfly (a bow shape). Copper for the strap across the back becomes more prevalent than a silver bar as you go further on in time also. A belt with butterflies (and sometimes turquoise) from the early 1900s through the 1930s is generally thought of as “early third phase” and a belt from the 1940s through 70s (or so) would often be referred to as “vintage” while anything newer would be modern to contemporary.

Although it is commonly said the Navajo (Dine’) borrowed the idea from Spaniards, thus the Concho Belt has become a long-standing Native tradition. Concho Belts reportedly began appearing in Navajo country in the late 1860s or early 1870s. Other Native Americans including the Zuni and Hopi also made traditional Concho Belts before long.

The basic form was derived from hair ornaments of the Southern Plains Indians, called hair plates. Hair plates were usually round, un-decorated, and with smooth edges. They were strung vertically on red trade cloth, horsehair, or leather. Men would wear this stripe of adornment in their hair and women would wear them as belts, sometimes reaching six feet long. They were made from German Silver, Copper, and Brass.

The Navajos owned concha belts long before they learned silversmithing. They obtained them from the Southern Plains Indians, through looting or trade. The concept of the concha belt began with the Plains Indian’s belts but was blended with early Spanish/Mexican concha designs (1700 – 1750 CE). These early designs originated from iron harness buckles and cast silver conchas with scalloped edges used for spurs.

Another silversmith, Atsidi Chon, went to Zuni in 1872, where he taught Lanyade how to work silver. Other men in turn taught silversmithing in the 1870s to men in Acoma, Laguna, and Isleta.

The earliest concho belts were made out of hammered coin silver. Their designs progress through stages, beginning with an oval shape that was scalloped on the edges, elementary stamping and chiseling. The center of the First Phase concho was an open diamond or oval and the back had a copper loop through which a leather belt could pass.

The railroads arrived in the Southwest in the 1880s. The Fred Harvey Company opened shops in the railroad stations and provided a ready market for Navajo silver. As a result, silver smithing flourished and designs were elaborated, often reflecting Anglo taste. The concho belt to the left has arrows that are intricately worked into the design, an example of some of the high-quality Fred Harvey jewelry that was offered.

During the Depression through World War II and into the 1950s, the Navajo made concho belts that were not on leather, perhaps because of a shortage of leather. They are made out of sterling silver. They were made for sale. Most women had small waists at that time; thus, many people wear this style as a necklace today.

A fine Concho Belt will be made of sterling silver (or better — .999 silver and gold are also known to be used). They are often embellished with Turquoise (or other gemstones) and are usually mounted on a good leather strap. At times, copper, nickel silver-, or silver-plated overlay is also used, but these kinds of belts are usually thought of as lower grade and the price should be reflective.

Another form of concho belt which appeared around mid-century was the “link” style concho belt. The link Concho belts are connected by rings between the conchos and fasten with a hook that can be attached at various places on the belt. No leather is used.

SILVER, for example 99.9% pure silver, is relatively soft, so silver is usually alloyed with copper to increase its hardness and strength. Sterling silver is prone to tarnishing, and elements other than copper can be used in alloys to reduce tarnishing, as well as casting porosity and fire scale. Such elements include germanium, zinc, platinum, silicon, and boron. Recent examples of alloys using these metals include argentium, sterlium, sterilite and silvadium.Oxidized silver  ( black coloring in the silver ) is a process that many jewelers use to give sterling silver a black patina. It gives the jewelry an antique or tarnished look. The process consists of taking clean sterling silver and using a chemical (liver of sulphur) to treat it to speed up the tarnishing effect.