Navajo handcrafted dangle earrings. Set in solid 14kt yellow gold with genuine shells and stones. Measuring approximately 1″ in total length. These are small dangle earrings that have a nice feel and are beautiful. 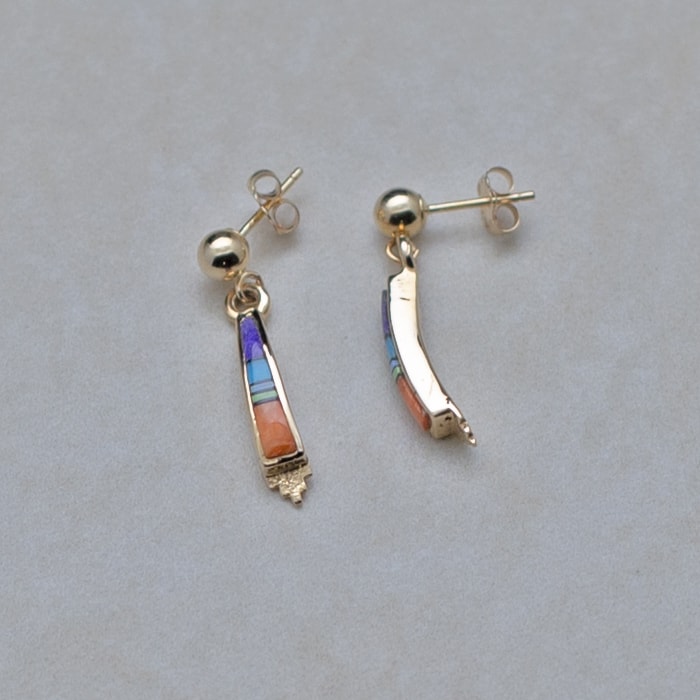 Living Spondylus shells are, indeed, very spiny, but the polished product looks very smooth the most used Spondylid Bivalve shell colors include orange, reds, and purples and may include distinct striations and color variations. One also finds pink, red, brown, yellow, orange, and white on the market. The Yellow Spiny Oyster’s especially rare. In the American Oceans, the Spondylids occur along the North American coasts, as far north as North Carolina, on the Atlantic Coast, and northwestern Mexico, on the Pacific Coast. It develops in waters to South America. The Orange Spiny Oyster occurs in shallow to moderately deep waters, where snorkelers and scuba divers readily harvest them. Purple Spiny Oysters grow in deeper water, making them more difficult to find and harvest.

American Turquoise varies in color from different consultancies of the minerals that are in the soil above where it was formed. In general, Arizona produces Blue Turquoise and Nevada produces Green Turquoise, Colorado and New Mexico predominately produce Green Turquoise. In all areas there are deposits of the opposite color but in much smaller amounts.