When it comes to heavy stamped traditional Navajo jewelry Darryl Becenti was a master. Since his passing in 202 his work has become very collectable. Known for his unique ability to use the technique of Repoussé in his jewelry. These dangle earrings are true works of art. Measuring over 2″1/2 in total length, they are very long and sure to make a statement when worn.

Ask a Question About BC 1314 Darryl Becenti large dangle earrings 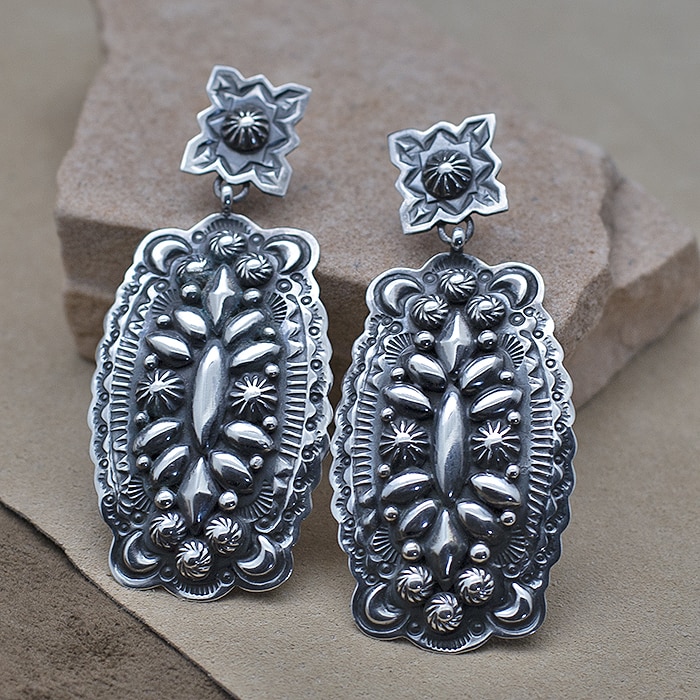 Darryl Becenti, born 1957 in Gallup New Mexico was taught silver smithing by his brothers in law, Leroy, and David Reeves in 1980. Darryl is also known for his sand painting. Darryl was born June.2nd 1957. He originally worked heavy construction for about 20 years before he began working with silver-smithing. In 1985 his brother-in-law David Reeves began to teach him. The Reeves family is one of the best known and highly regarded Navajo families in jewelry making.  Darryl’s first pieces were actually in copper, and this is where he perfected his stamping style. All his stamps are handmade. He considers his work “Old Style”. Darryl has taken numerous awards from Ceremonials over the years. Darryl passed away in April,2020.