Set in solid sterling silver with hand cut stones and shells. These dangle cross earrings are the perfect size. Measuring 1″ x 1/2″ with a total dangle length of 1-1/2″ when worn. Each earring has 10 individual pieces. Sterling silver wires are used. 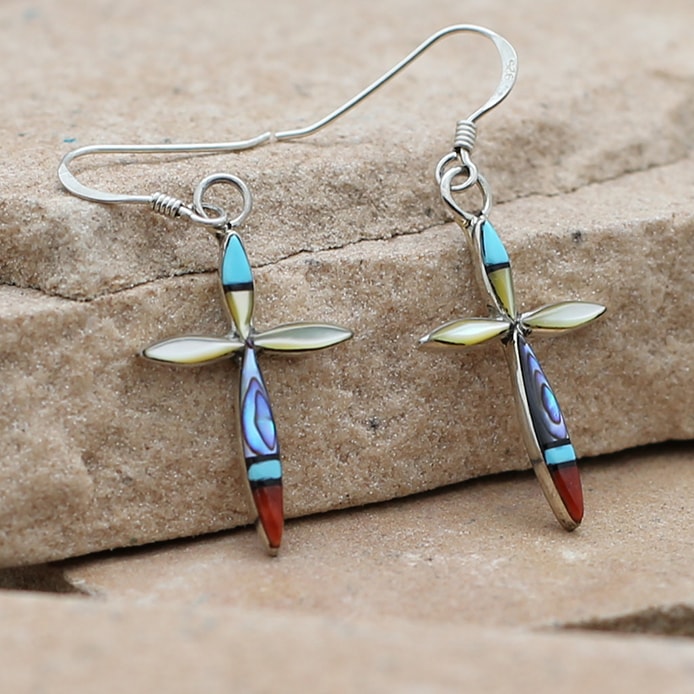 Combining many stones into one piece makes some of the most beautiful and exciting Native American jewelry.   Depending on how the stones are cut, this style of combining stones can be called Cluster-Work, Needle Point, Petit Point and Snake Eyes.  These four styles emerged in the early 1920’s-1940’s  and are primarily made by the Zuni Tribe, although some Navajos will make similar designs. These styles have a feminine quality to them, as the stones are set in small and elegant settings.

Abalone Shell (as well as most seashells) is a “Bio-Crystal” meaning it is created by a biological organism rather than formed in the earth from inert minerals, like carbon or silicon. Shells are made of nacre (aka Mother of Pearl) which is Aragonite or Calcite crystals layered with proteins secreted by the sea animal. As the Abalone grows it deposits multiple layers over time creating bright rainbow iridescent colors when light refracts the stacked microscopic layers. Abalone is ideal for jewelry and has been worn for thousands of years by Native Peoples.