One of the most frequently carved Zuni fetishes; the turtle fetish serves as a mediator link to Zuni ancestors. Turtle stone carvings are associated with deliberateness, steadfastness, self reliance, tenacity and longevity. A turtle fetish is a symbol of Mother Earth. TheseThese earrings follow this in the form of the TURTLE FETISH. Measuring  1-1/4″ in total length when worn, these earrings are on the smaller size. Beautifully crafted with great details. 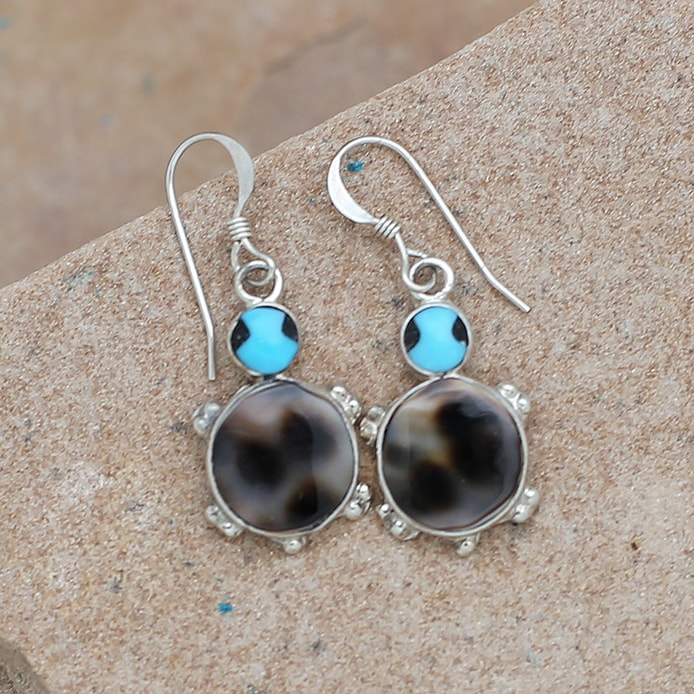 (The Head of the turtle) The Sleeping Beauty Mine, located in Globe, Arizona, is no longer an active mine. For many years it produced a wide range of turquoise that is now even more highly prized for its solid soft blue color, with little or no matrix. The color of the turquoise ranges from a deep royal blue to a light sky blue. The mine originally was worked for copper and gold but during the last five decades or so it has produced gemstone quality turquoise in quantities to satisfy the commercial market. In general, the miners lease portions of the “dumps” and sort turquoise from there.

( The eyes of the turtle) Jet is a product of high-pressure decomposition of wood from millions of years ago, commonly the wood of trees. Jet is found in two forms, hard and soft. Hard jet is the result of carbon compression and salt water; soft jet is the result of carbon compression and fresh water. Native American Navajo and Pueblo tribes of New Mexico were using regionally mined jet for jewelry and the ornamentation of weapons when early Spanish explorers reached the area in the 1500’s.Today these jet deposits are known as Acoma jet, for the Acoma Pueblo.

(The body of the turtle) Pen Shell The Pinnidae are a taxonomic family of large saltwater clams sometimes known as pen shells. They are marine bivalve molluscs in the order Pteriida.