Uniquely shaped Night Sky jewelry collection dangle earrings. Set in sterling silver with hand crafted inlay stones along with Cultured opal elements. They measure 1 1/2″ in  length and have a width of 3/8″. Light weight and easy to wear. 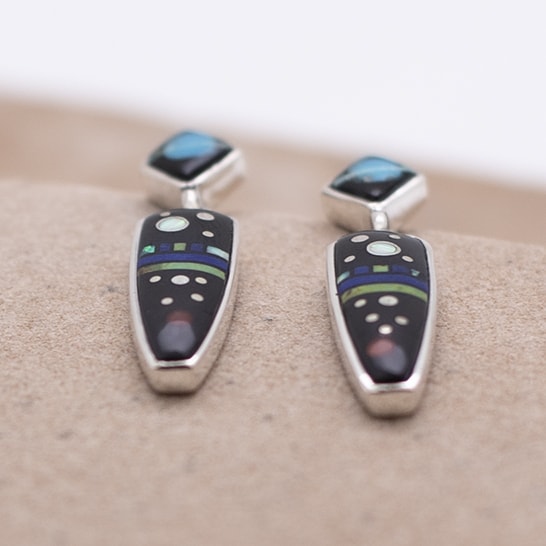 Inspired by the clear dark night skies of the Navajo Nation. The Black you see is called “JET “and is actually a fossilized wood, which has been compressed over millions of years. Multiple pieces of stone make up the mosaic image. The stars are made from pieces of silver and the larger star and moon along with the shooting star are made from Cultured Opal.

SILVER, for example 99.9% pure silver, is relatively soft, so silver is usually alloyed with copper to increase its hardness and strength. Sterling silver is prone to tarnishing, and elements other than copper can be used in alloys to reduce tarnishing, as well as casting porosity and fire scale. Such elements include germanium, zinc, platinum, silicon, and boron.