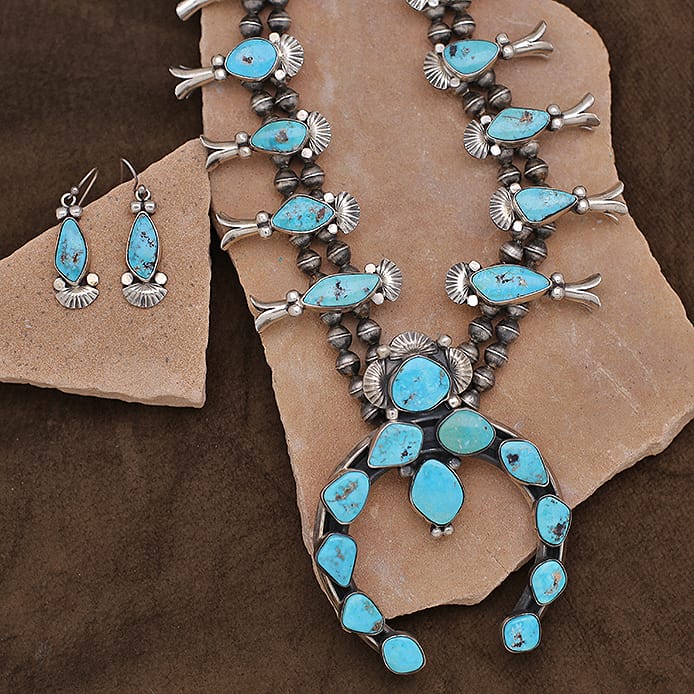 Often defined for its age and or time period, the 1940s through 70s (or so) would often be referred to as “vintage” while anything newer would be modern to contemporary. Our collection of VINTAGE JEWELRY has been hidden away for many years with a private collector. Released under the promise anonymity, this collector is letting Spirit of Santa Fe offer it for sale. We guarantee its 100% authenticity along with all-natural stones, sterling silver, handcrafted stamp work, and even a few hand wrought sterling silver pieces. More importantly every piece is one of a kind and is a window into a time period when Indian Jewelry was known for its rare, beautiful stones and sometimes RAW craftsmanship by today’s standards.

Our 3-generations of trading with the Native Americans have given us this opportunity which we are honored to offer to our valued new and existing customers.

Morenic Turquoise is mined in southeastern Arizona, in Greenlee County. It is light blue to high blue in color. Morenci has an unusual matrix of irregular black pyrite, or fool’s gold; when polished, the pyrite often looks like silver. It also is sometimes webbed in a darker shade of blue, called water webbed. Morenci turquoise is well known because it was one of the first American turquoises to come on the modern market, and is often difficult to obtain because the mine is now depleted, making it an exceedingly collectible turquoise.

Material coming out in the 1960’s seems to be harder, tending more to the blue-greens, usually with the pyrite. In the 1970’s, the material was a much brighter blue, often with quartz along with the pyrite.