An Albert Jake original set. Handcrafted and set in solid sterling silver with genuine high grade Dry Creek turquoise. The Navajo pearls are graduated in size with Larimar beads intermixed. The Navajo pearls measure 20″ and can be worn by them selves with the matching earrings. The large triangular shaped pendant measures 3″ in total length x 2-1/4″ in width. The high grade Dry Creek turquoise stone measures 1-1/2″ x 1-1/2″. This is a one-of-a- kind set. 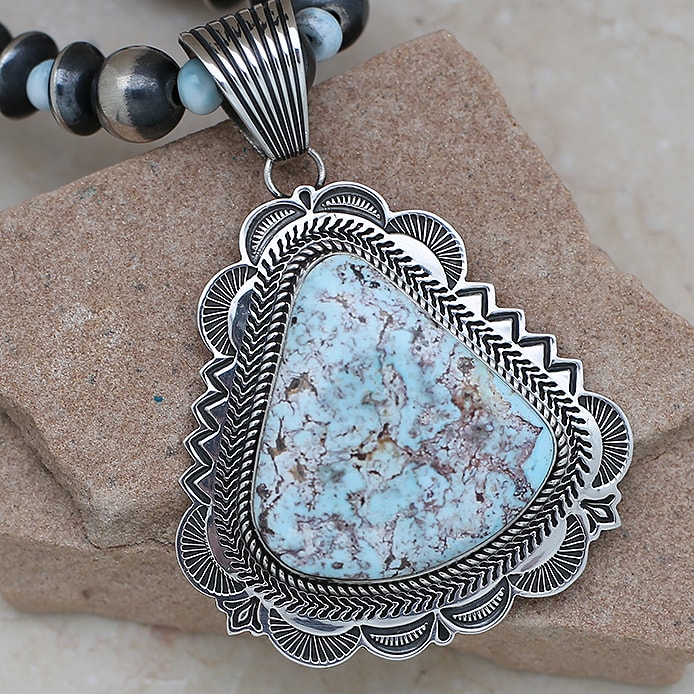 Dry Creek Turquoise
The Dry Creek Turquoise Mine is located on the Shoshone Indian Reservation near Battle Mountain, Nevada. The mine was first discovered in 1993, but the nature of the material led to much confusion, due both to its extreme hardness and odd color. After having the material assayed, it was proven to be turquoise. The miners at Dry Creek have also found a white stone at this deposit that is mistaken as “white turquoise”, but is actually Aluminite.

The turquoise from the Dry Creek mine, which has also been known as the Godber as well as the Burnham mine, is a creamy pastel-blue and blue-white turquoise. The gem grade material from this mine is very hard and available only in small quantities. Since turquoise gets its pigment from the heavy metals in the ground where it is formed, and this area has a distinct lack of heavy metals, the odd color is due to a slightly heavier balance of aluminum rather than copper in the stone’s chemistry makeup. The matrix in Dry Creek Turquoise is typically light golden or brown-gray to gray-black. This turquoise is beautiful alone in a piece of jewelry and is especially striking when juxtaposed with other colors of turquoise in a single creation.

To date, no other vein of this color turquoise has been discovered, and when this current vein runs out, that will be the last of it. Because this turquoise is as rare as the legendary sacred white buffalo, the Indians call it “White Buffalo” Turquoise.