This contemporary style Navajo Squash Blossom necklace was entirely handmade of solid sterling and signed by Navajo artist Alice Lister . The necklace has a Naja that is carved from a solid piece of silver, nothing just added or pieced together. All openings are hand carved between each stone. There are 80 individual pieces of Natural Sleeping Beauty Turquoise from Arizona(mine now closed),  Naja is approximately  3″ x  3″ Each side is made of 5 separate sections that are each carved from a solid piece of silver with 52 individual pieces of turquoise. Necklace is approximately 20″ in length. A single stone dangles from the handmade silver clap as a unique finishing touch. This is a true collectors piece that will complement any collection and  is certain to become a family heirloom..
Please take a look at our bracelet,earring and ring pages for complementing pieces 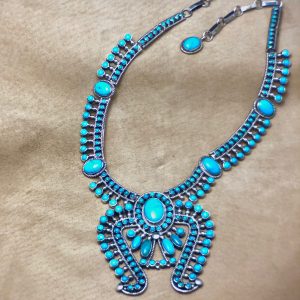 Sleeping Beauty  The Sleeping Beauty mine is located near Globe, Arizona. Its turquoise is noted for its solid, light blue color with no matrix. Sleeping Beauty turquoise is the favorite of the Zuni Pueblo silversmiths for use in petit point, needlepoint, and inlay jewelry. This mine is one of the largest in North America and is still operating.