Traditional Navajo squash blossom necklace. Handcrafted by Navajo artist P. Johnson. Set in solid sterling silver and genuine Royston turquoise. Over 130 individual hand cut stones were used in the creation of this beautiful necklace. Measuring 30″ in total length with a Naja measuring 2-3/4″ x 2-3/4″. There are 10 blossoms with 9 stones each. They measure 1-3/4′ in length by 3/4″ at there widest point. Truly a one-of-a-kind piece. ** Earrings shown are sold separately ** see them on our website – SWS 187 & SWS 160 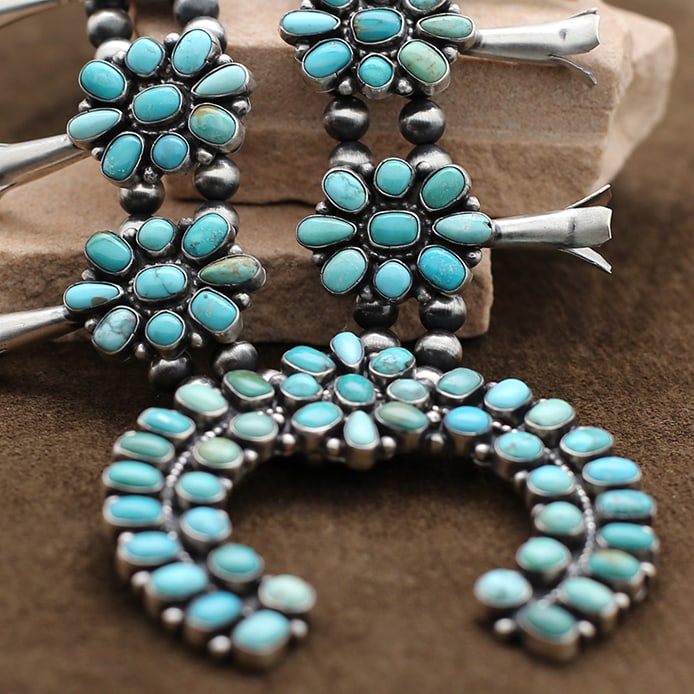 Royston Turquoiae
Royston is a district in Nevada consisting of three turquoise mines: Bunker Hill, Oscar Wehrend, and the main producer, The Royal Blue. Royston is known for its beautiful colors ranging from deep green to rich, light blues which are set off by a heavy brown matrix. The Royston mine is producing a little high-grade turquoise today, operated by the Ottison family. They process most of their material into finished cabs and allow very little rough to come onto the market. This controlled output has raised the price of this material considerably in recent years.