Often defined for its age and or time period, the 1940s through 70s (or so) would often be referred to as “vintage” while anything newer would be modern to contemporary. Our collection of VINTAGE JEWELRY has been hidden away for many years with a private collector. Released under the promise anonymity, this collector is letting Spirit of Santa Fe offer it for sale. We guarantee its 100% authenticity along with all-natural stones, sterling silver, handcrafted stamp work, and even a few hand wrought sterling silver pieces. More importantly every piece is one of a kind and is a window into a time period when Indian Jewelry was known for its rare, beautiful stones and sometimes RAW craftsmanship by today’s standards.

Our 3-generations of trading with the Native Americans have given us this opportunity which we are honored to offer to our valued new and existing customers.

VERY RARE- 1972 inter-tribal ceremoials winner. Held every year since the 1950’s, this event is a way for an artist to showcase his/hers ability to make there craft. This piece is set in solid sterling silver with tufa cast blossoms & Naja. Measuring approx. 30″ with Naja measuring 2″ x 2-1/2″. Matching earrings are 1-1/4″ x 3/4″. 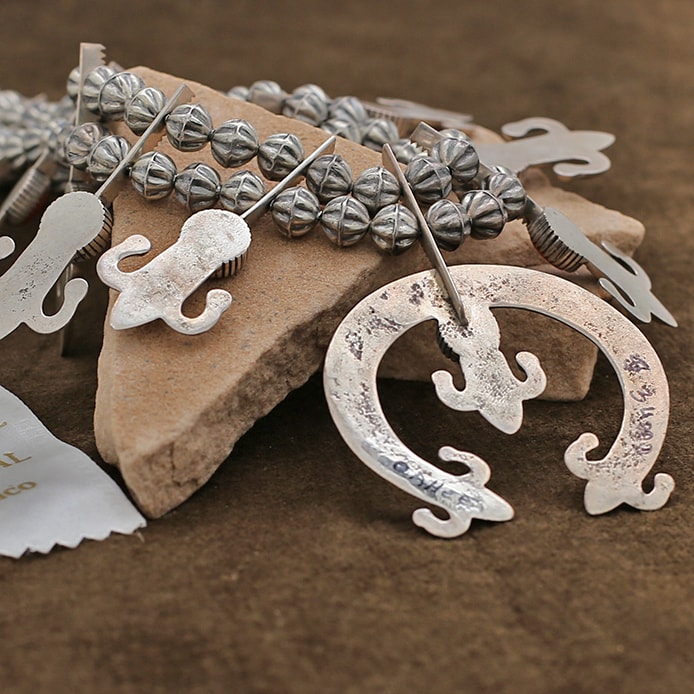 The Sandcast Jewelry Method: Sandcast Native American is a style of Navajo jewelry was first created by silversmiths sometime between 1840 and 1860. The basis of this process is a mold made by carving the desired design into a stone. Using this mold, a piece of jewelry is made (belt buckle, bracelet, ring, etc.) and becomes the “master sample” from which the subsequent sandcast pieces are made.

Sandcasting is a labor-intensive, hand process not to be mistaken with centrifugal and vacuum casting processes. Artisans using this method estimate that it takes approximately three days from start to finish to make a medium sized bracelet.

Sandcasting evolved from casting using sandstone or tufa stone, a relatively soft stone created from compacted volcanic ash. Sandstone held up better, but the tufa was easier to carve.

The process involves many steps, starting by cutting a stone in half and grinding both halves until smooth on the cut side. The tufa stone is sometimes soaked in water to keep dust down and to make it carved in reverse on one of the smoothed halves. Then a cone shaped channel is carved from one edge of the design to the outer edge of the stone. A corresponding channel is carved on the other half. When the two halves are fitted together, this channel becomes the passage way by which the molten silver is poured into the mold. Superheated air trapped in the mold can ruin a design. To prevent this, vents are carved from the extremities of the design out toward the edge of the stone, allowing the air to escape. The stone mold is heated with a torch until it is carbon smoked on the inside of both halves. This prevents the silver from sticking to the mold. The mold is now ready for casting.

The two pieces of the tufa stone are placed together with the pour channels aligned. Originally the pieces were held together by placing strips of wet leather around the stone. As the leather dried, though, it would shrink slightly and bind the two pieces of stone tightly together. Today, artisans use a number of methods, such as wrapping with wire, plywood board and clamps, or rubber straps.

Following the completion of the stone mold, the silver is heated in a crucible with a torch until it is the right temperature, approximately 1850 degrees. Historically, temperature was judged by the color of the molten silver. That is still the most common method used even though many artisans now have access to crucibles with digitally controlled heat. Such fine control increases the chance for a successful pour. The temperature of the outside air must also be taken into consideration. If it is very cold, the silver can become too cool before it runs through the mold. When the silver is judged to be hot enough, it is poured into the mold through the previously carved channel.

The force of gravity pulls the molten silver down through the channel and into the carved mold. Thus the piece is said to have been gravity cast. The tufa stone mold is allowed to cool and the silver piece is removed. Extra silver from the pour channel and the air vents are cut off (debarring) and placed back into the crucible to be reclaimed for future use.

A tufa mold may allow several pours if the design is small and relatively simple. With larger, more complex designs, one or two pours is usually all that can be made from a tufa mold before the stone breaks or the design is ruined by the heat of the silver.

The piece is finished by buffing, filing, soldering on findings, setting stones, etc. and then the piece is ready for the consumer; however, if the piece obtained from the tufa casting is good enough, the artisan may decide to use it as a “master sample” (a model) in the sandcasting process. The process of sandcasting is very similar to that of the tufa casting just described, with the exception of the necessity of carving a new design.

In place of carving a new design, the piece obtained from the tufa casting is used to make the mold in casting sand, a 60/40 mixture or dry cement and oil. The master sample is placed face up on the bottom of a wooden frame. The casting sand is packed down over the master until the frame is filled and firmly packed, completely covering the master piece. The top of the frame is then covered with plywood, cut to size, and turned over so that the bottom is now on top. The artisan moves the frame containing the sand master around on the work surface in a circular motion. This is to ensure that the sand has totally covered the master so that all the design elements will be completely captured.

When the wooden covering is removed, the master piece, embedded in the sand is exposed. It must be lifted out of the sand taking great care not to disturb the impression left in the sand.

This impression in the sand becomes the new mold and its preparation is much the same as that of the tufa mold. A channel for the molten silver and air vents are carved into the mold with a knife. A flat tufa stone is placed against the wooden frame and held together by means of rubber straps. Once again, the molten silver is gravity fed into the mold via the pour channel.

The silver begins to harden almost as soon as it is poured so the artisan must work quickly. The frame is turned so that the silver is resting on the tufa side of the mold. The frame containing the sand is lifted off leaving the silver piece sitting on the tufa stone. The process must be repeated for each piece of jewelry as the sand mold is destroyed by the heat of the molten silver.