Wide band cluster ring by Navajo artist Albert Jake. Set in solid sterling silver with orange spiny oyster shell and #8 turquoise from Nevada. Measuring 1″ 3/4 in length and 1″ in width , this is a medium sized ring. This ring has a stamped shank and is not easily sized. Please contact us before placing the order. 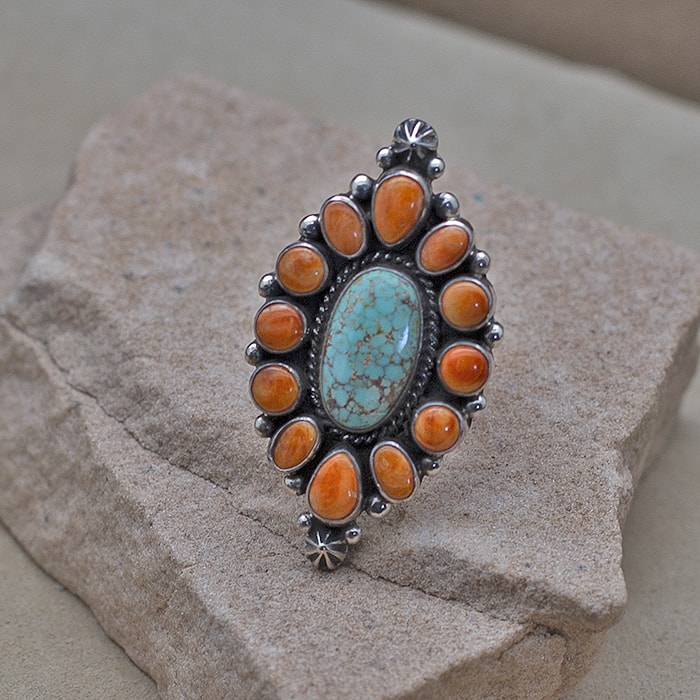 Number 8 turquoise
Located in the Lynn mining district in northern Eureka County, north of Carlin, Nevada, the Number 8 mine is on the west side of the Tuscarora Range, and was at one time a gold and copper mining operation. It was in a large mining district encompassing ten 20-acre claims and was active from the 1930’s through the early 1950’s. Host rocks for the Number 8 deposit consist of intensely altered quartz monzonite, shale, and thinly bedded black chert, which are complexly folded, faulted, and much altered. Turquoise is concentrated along quartz veins in the intrusive rock and along faults in the sedimentary rocks. Number 8 turquoise is famous for its black, golden-red and brown spider web matrix background, which is set off by the soft blue to blue green turquoise. Only rarely does gem material appear: a very dark blue turquoise with black spider web matrix. The mine is now depleted, and Number 8 turquoise is extremely rare and valuable.