Renown Navajo artist Leonard Nez has crafted this ring. Set in solid sterling silver with genuine blue-green Royston turquoise. His detailed silver stamping and raised setting is a hallmark of his style and really makes this ring stand out. This is an exquisite piece of Native American jewelry. 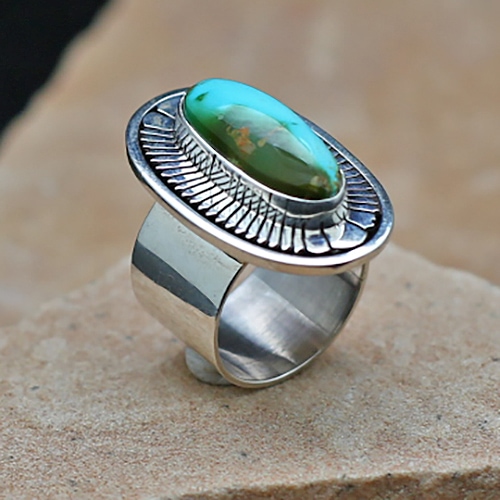 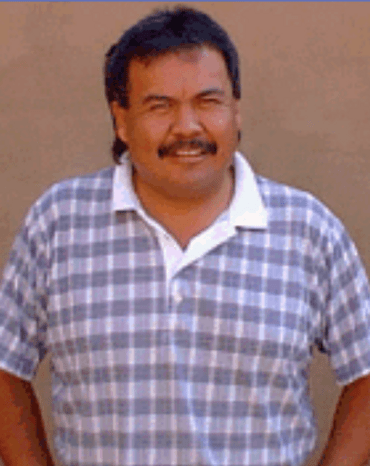 Born in Keams Canyon, Arizona in 1956, Leonard Nez married his wife Marian, a Navajo silversmith in her own right, whom he credits with teaching him.  After creating his first pendant, he was asked to make 15 more! Within a year he was able to support himself with his jewelry making.

​Well known jeweler, Gibson Nez was a great mentor and role model. He took Leonard under his wing and called him brother, even though they share the same last name they are not related.

​In Leonard’s spare time he loves to rope in the Rodeos on the weekend. He even lost his right thumb while roping, but it has not affected his great work. He enjoys all that he does in creating his jewelry. He believes it all comes from his heart.

​Leonard can take pride in many awards bestowed on his creations. Since first competing in 1993, Leonhard has consistently walked away with Best in Show at some of the most prestigious juried competitions. He also has a silver bowl with lid and stand on permanent display at the Smithsonian.

​He is a quiet and deeply spiritual man, who finds his inspirations from the Lord, his daughter and from the people who appreciate his work. “I want each piece to be better than the last. I do my own designs, the ones that speak to me,” he says.

“I pray to the Lord about my designs and sometimes, sitting in church, a design will come to me, as if on a whisper.”