Navajo Cluster ring with orange spiny oyster shell. Set in solid sterling silver. Handcrafted by a Navajo artist. 15 individual hand cut shells surround the main colorful center stone. This traditional design is hallmark of many Navajo artists. Measuring 1-1/2 x 1-1/4″ , the tear drop shape looks beautiful when worn. Easily sized to fit any finger.Please specify your size when ordering and we would be happy to size it to fit. 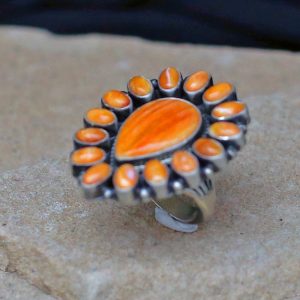