If your looking for a classic vintage piece then this is it ! CIRCA 1960’s  Zuni “Knifewing” ring. Set in solid sterling silver with genuine white mother of pearl, jet, coral and turquoise. Measuring 1″ x 1″, this is a small sized ring. The Knifewing image is a unique story of the Zuni tribe. 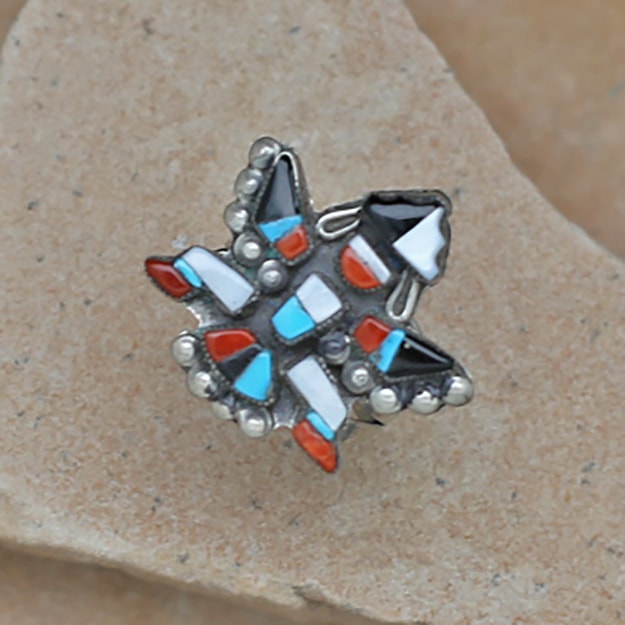 A Zuni Silversmith named Horace Jule (1901-1978) is credited as the first to translate the Knife-wing into a piece of silver jewelry in 1928. By the 1940’s this motif was very popular. It was displayed in the 1941 exhibition of the “Indian Arts of the United States” The inlay pieces with these images made from the 1930’s-1960’s is particularly prized by collectors. Although Horace Iule (also known for his crosses) is credited with creating the first knife wing design in 1928, cut and filed out of wrought silver, other Zuni, Navajo, and Pueblo began producing knife wing designs. The knife wing became one of the first designs that the Zuni inlaid with stones.

Knifewing, also Knife Wing, is a half man – half eagle Zuni spirit or God with razor sharp feathers made of flint. He is the ultimate warrior. … “This curious god is the hero of hundreds of folklore tales, the tutelary deity of several societies of Zuni.