Stunning dual blade knife.Beautiful Damascus steel is used. Silver inlay bear paw is on one side. The blades measure 4 1/4″ in length and are almost 1/8″ thick and are non-locking. The edges of the blades have a unique carved design that can be seen on the blades both when open and closed. This detail makes this knife stand out from the rest. The entire knife measures over 5″ in length with natural Antler inlay handle with brass end casing. This is a heavy knife that comes in a custom leather case. 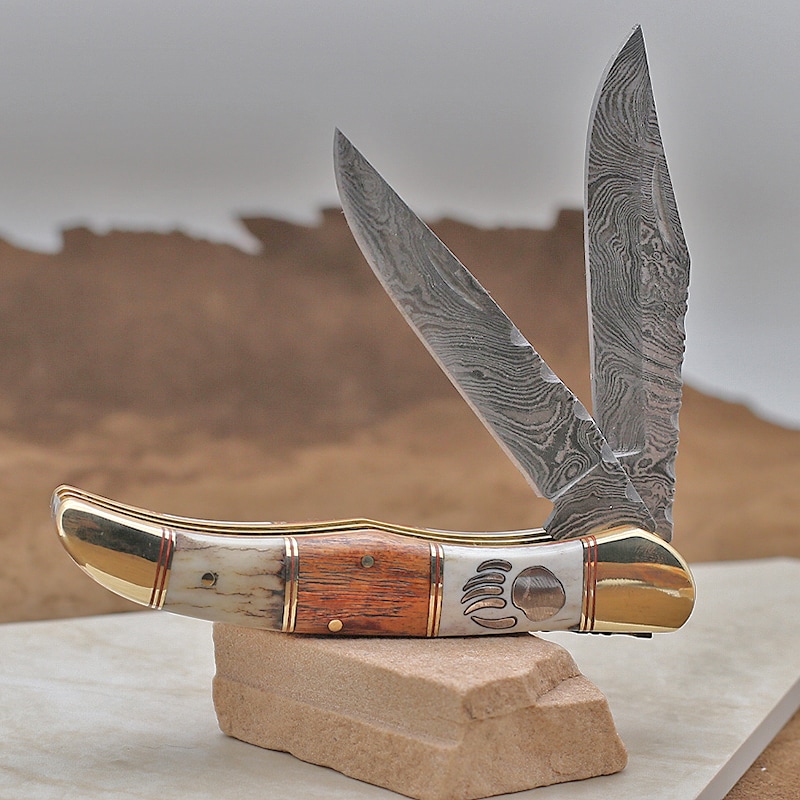 Antler Handle: Antlers are extensions of an animal’s skull found in members of the Cervidae family. Antlers are a single structure composed of bone, cartilage, fibrous tissue, skin, nerves, and blood vessels. They are generally found only on males.

Damascus steel was the forged steel of the blades of swords smithed in the Near East from ingots of Wootz steel imported from Southern India and Sri Lanka. This was known as Sinhala Wane (Sinhala Steel). These swords are characterized by distinctive patterns of banding and mottling reminiscent of flowing water, or in a “ladder” or “teardrop” pattern. Such blades were reputed to be tough, resistant to shattering, and capable of being honed to a sharp, resilient edge.

The steel is named after Damascus the capital city of Syria and one of the largest cities in the ancient Levant. It may either refer to swords made or sold in Damascus directly, or it may just refer to the aspect of the typical patterns, by comparison with Damask fabrics (also named for Damascus).