CIrca 1970- Vintage Zuni cuff bracelet by Rosemary Cellicion. The inlay ed image in the bracelet is of:

The Rainbow Man is a symbol of protection often seen on the Zuni’s war shields and is a symbol of the rainbow which represents the life sustaining rains for their agricultural importance in the arid American Southwest. The Rainbow Man was one of the first figures used in traditional Zuni mosaic inlay jewelry.

Set in solid sterling silver with over 50 individual hand cut stones were used to create this vintage design. Measuring 1-3/4″ at its widest point , tapers down to 1/4″. The bracelet is on the larger size but due to its design it is able to be sized to fit most wrists. Please call us with any question you might have about this piece. 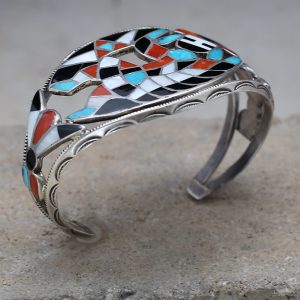 The following stones are used in this Vintage bracelet:

Jet  (black) is a product of high-pressure decomposition of wood from millions of years ago, commonly the wood of trees . Jet is found in two forms, hard and soft. Hard jet is the result of carbon compression and salt water; soft jet is the result of carbon compression and fresh water. Native American Navajo and Pueblo tribes of New Mexico were using regionally mined jet for jewelry and the ornamentation of weapons when early Spanish explorers reached the area in the 1500’s.Today these jet deposits are known as Acoma jet, for the Acoma Pueblo.

The provenance story of the White Mother of Pearl shell begins in the remote crystal clear turquoise waters of Northern Australia, nurturing and growing the sought after White South Sea Pearls. The lustrous pearly white color of the shells reflect the pristine natural environment in which they are formed and shells from this area are renowned to have the purest white coloring.