There’s just something about Blue Gem Turquoise. It is a treasure: a rare, valuable and historic American turquoise. When we think of Blue Gem Turquoise, we think of translucence, depth, watery, what we mean by “non-opaque, silicated” jewels. This turquoise is hard and often won’t change color, takes a high polish and will be beautiful one hundred years from now. The character and beauty of these stones are impossible to fully capture in images, since this turquoise has a unique character that’s hard to describe. It is like pools of glassy water captured in solid form. We believe this may be some of the greatest turquoise ever mined and once you own a piece you will be addicted to Blue Gem Turquoise. 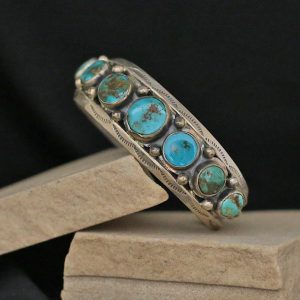 Mid 1960’s to early 1970’s is the time period of this piece. 7-All natural Blue Gem Turquoise stones make a strong statement. Center stone measures 3/8″ oval and they taper down in size with the last stones measuring approximately 1/8″ oval. Triangle wire form the outside edges with hand stamp work along these edges. Hand twisted wire runs down the center. Classic design and perfectly balanced.