Vintage 1970’s Blue Gem turquoise cuff bracelet. Hand stamped leaf work wrap around each of the 5 stones. Silver balls are placed around the leafs and add a distinctive element. Hand made bezels hold each stone in simple fashion. Measuring 3/8″ in width, 3 of the stones measures 1/2″ x 1/8″ with the end stones measure 1/8″ round. 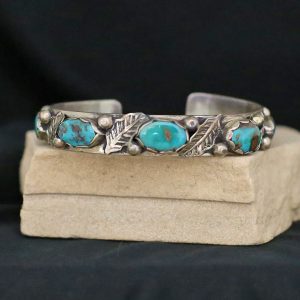