1970’s shadow box style bracelet with Bisbee Turquoise. Old style design refereed to as a shadow box because of the way the silver is cut out on the top and the bottom creating a shadow effect around the stones. This piece shows its vintage by the weight of the silver used.The center stone measures 7/8″ x 5/8″ with the outside stones measuring approximately 5/8″ x 1/2″. The bracelet measures 1″ 1/2″ x 1″ taper. It can be shaped to fit almost any wrist. 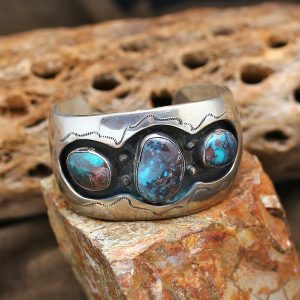