1970’s single stone Bisbee blue turquoise ring. This was a typical totally handmade styled ring by any standard in the late 1960’s & early 1970’s. By today’s standard its as unusual as it gets. Navajo artists rarely make a ring of this type by hand today. The rings today use cast shanks, pre made bezels and cabochons turquoise stones. This is a all hand hammered sterling silver forming the shank and hand stamp work on the sides with a hand cut piece of Bisbee blue turquoise. Measuring 3/4″ x 1/4″ taper. We can size this ring to fit your finger. 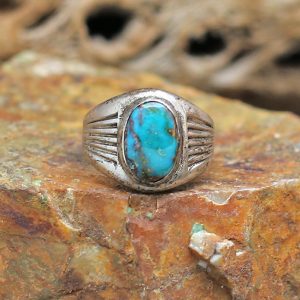