Circa 1960’s Navajo ring. Entirely hand crafted and set in solid sterling silver. Each element of  this ring is made individually and layered to create this simple design. You will not find a ring made like this today with a beautiful smokey Bisbee turquoise stone. Measuring 3/8″ x 5/16″,its the perfect size.Easily sized to fit almost any finger, just specify your size when checking out. 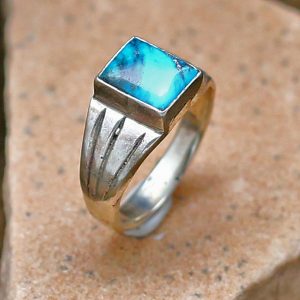