1970’s Vintage shadow box cuff bracelet set in solid sterling silver.A single Bisbee turquoise with black and brown matrix.Wrapped in a hand cut sliver bezel. Three pieces of 1/2 round wire is used to form the shape of the bracelet in a unique design. Measuring approximately 2″ across x 1″ 1/2, with 5″ 1/2 of silver with a 1″ opening. 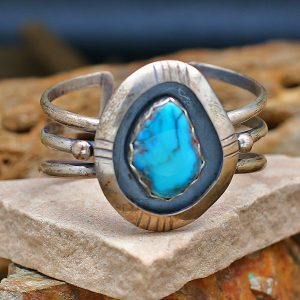