1960’s Rare Blue Gem turquoise channel inlay bracelet. The coloring of this bracelet is hard to see in the pictures. Beautiful greens and blues with the brown matrix are stunning. 10 stones make up the 1/2″ wide inlay. Each stone measures 1/2″ x 1/4″. The shape is specific to the channel so there is no shaping it to fit, but send us your measurements and we can let you know if your the lucky one ! Side stamping details really finish off the design.Please call for details. 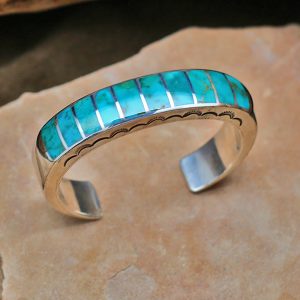