Vintage 1970’s Navajo Cluster ring. Set in solid sterling silver with high grade Red Mediterranean Coral and Morenci turquoise. The artist uses beautiful stones to make this simple design stand out. The oval coral pieces ( 10 ) measure 3/8″ x 1/8″ with a single turquoise stone measuring 5/8″ x 3/8″. The entire settings measures 1-1/2″ x 1-3/4″. This is a large oval ring that is sure to make a statement.**Please specify your size when ordering and we would be happy to size it for you.

Combining many stones into one piece makes some of the most beautiful and exciting Native American jewelry.   Depending on how the stones are cut, this style of combining stones can be called Cluster-Work, Needle Point, Petit Point and Snake Eyes.  These four styles emerged in the early 1920’s-1940’s  and are primarily made by the Zuni Tribe, although some Navajos will make similar designs. These styles have a feminine quality to them, as the stones are set in small and elegant settings.

*Cluster Work
Many artist excel at combining stones of any shape into large clusters to form a design/pattern. The term “cluster work” is a general term that is used to describe this style. Many times “cluster work” is used synonymous with Petit Point.  Generally with “cluster work”  combinations of small round, square, rectangle and teardrop stones are used to create an infinite amount of designs. 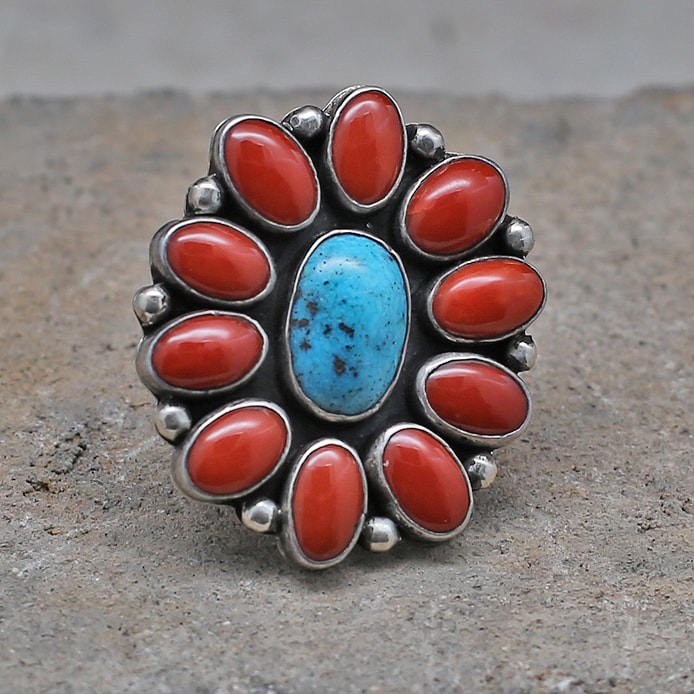