Vintage 1960’s Navajo handcrafted ring. Stunning example of high grade Persian turquoise is used for this extra long single stone ring. The bright blues with silver matrix make this ring stand out from the rest. Measuring 2″ in overall length with the stone measuring 1-3/4″ x 3/4″ at its widest point. One of a kind ring. It can be sized to fit, please specify your size when ordering.Stamped with the artist hallmark  ” JVW” 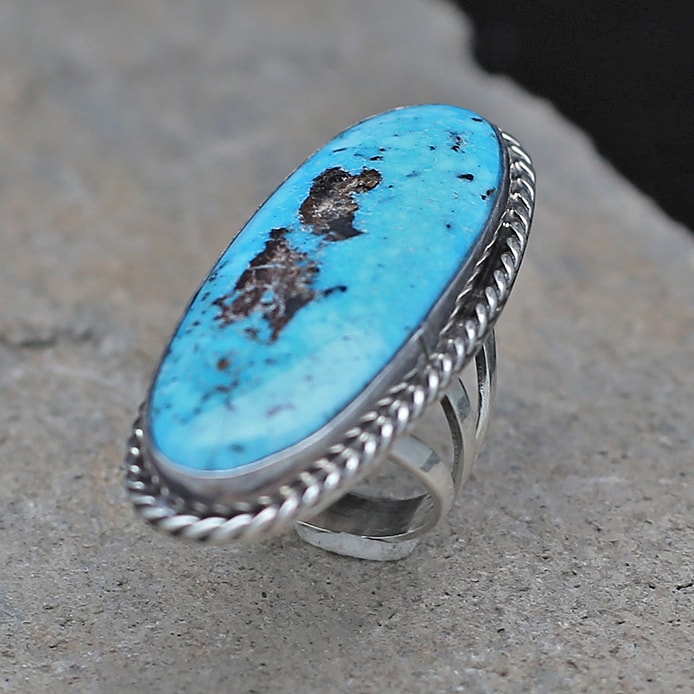 Persia is known to have some of the world’s oldest Natural Turquoise mines in the world. Perhaps the first type of turquoise that was introduced into western culture through the Silk Road, Persian Turquoise became available to Europe, Western Asia and America coming from cities like Tous, Neishapour, Damghan, Grogan, and Baghdad among others. When the rare turquoise was brought into Europe around the 16th century, people who usually spoke Chinese, Persian, Turkish or Arabic carried the stone. The word turquoise was coined when Persian Turquoise was brought from Turkey mines in historic Khorasan, a province of Persia.

Persian Turquoise comes from a number of mines in modern day Iran. The stones from all mines show a great color variation. Many mines were worked around Nishapur, 225 miles east of the southern end of the Caspian Sea, close to old caravan routes. Persian Turquoise has been highly coveted in the middle east for centuries.