Vintage 1970’s Zuni inlay ring . Set in solid sterling silver  with hand cut stones of coral, mother of pearl, turquoise and black jet. This type of style of jewelry is referred to as overlay. A process in which two pieces of silver are used to create a overlay channel to which the stones are inlay ed into. This is not a common style and is rarely seen. The ring measures 1-7/8″ x 3/8″. Please specify your size when ordering and we would be happy to size it for you. 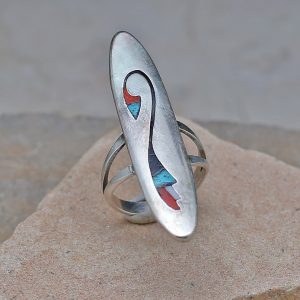 The following material were used in this ring;

Jet is a product of high-pressure decomposition of wood from millions of years ago, commonly the wood of trees . Jet is found in two forms, hard and soft. Hard jet is the result of carbon compression and salt water; soft jet is the result of carbon compression and fresh water. Native American Navajo and Pueblo tribes of New Mexico were using regionally mined jet for jewelry and the ornamentation of weapons when early Spanish explorers reached the area in the 1500’s.Today these jet deposits are known as Acoma jet, for the Acoma Pueblo.